Worlds Collide is the third KeyForge set, announced at Gen Con on August 2nd 2019 and released on November 8, 2019. In the US, Target stores unintentionally leaked and then started selling Worlds Collide starter sets on October 2nd, more than one month before the official release date.

The first set to include new houses, Worlds Collide brought houses Saurian and Star Alliance, while taking out Mars and Sanctum. The total cardpool is 405 cards, of which 284 are new and 121 returning from one or both previous sets. The increased cardpool is only due to a larger number of Special rarity cards, while the “base” number of cards per house is the same as in previous sets, typically 52.

New mechanics first appearing in Worlds Collide are exalt, ward, enrage, and abilities that refer to the center of the Battleline (on creatures with the new Leader trait). Worlds Collide also introduces Star Alliance creatures (CALV-1N and Explo-rover) that can also be played as upgrades.

A new type of card introduced in Worlds Collide are Anomalies: cards that are not part of any current or past set, but from possible future sets. These very rare cards can appear in any house and usually contain new keywords or mechanics not yet seen in any other card. There are 10 Anomalies available in Worlds Collide (these are in addition to the 405 standard cards in the set). About 3.5% of Worlds Collide decks contain an anomaly.

The introduction of new houses and mechanics brought a significant shift in gameplay. Boards are even more important than in Age of Ascension, new cards that prevent stealing are introduced, and there are significantly more abilities that modify key costs. All of this makes Worlds Collide’s gameplay the most intricate thus far.

House leaders are some of the best cards in the game, while Quixxle Stone, Fangtooth Cavern and Snag's Mirror are new, gameplay-warping artifacts. Some of the strongest combos are in house Saurian: Cincinnatus Rex + The Golden Spiral, or cards that take advantage of Tribute. Purging is an increasingly common mechanic in house Dis, with cards like Infurnace and E’e on the Fringes. 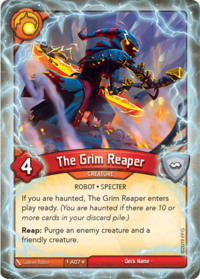 An Anomaly card in Worlds Collide

Special rarity cards in WC include Mega versions of common Brobnar creatures (each with their own Brew), a unique Blaster for each common Star Alliance creature, as well as different Banes (in Dis) and Plants (in Shadows) for different houses. Dexus and Sinestra are also variant cards.

“Fixed” cards are Hyde and Velum, Igon the Green and Igon the Terrible, Xenos Bloodshadow and Toad, as well as Ortannu the Chained with Ortannu’s Binding. Moor Wolf always appears with at least 2 copies, while Chain Gang and Grumpus Tamer always appear with another card.

This table indicates how many cards are in each house of Worlds Collide and how many are of each rarity. The bottom section displays the number of reprints in each house and the set from which they originated.

A Worlds Collide deck won the first Archon Vault Tour after the release of the set. This was the first ever time that a non-Call of the Archons deck won an Archon Vault Tour. Although many fewer Worlds Collide decks have been opened than Call of the Archons ones, Worlds Collide proved that it could compete head to head with earlier sets by placing well in several high-level Archon tournaments since its release. Cards such as Infurnace are very effective in mitigating the impact of powerful cards like Dust Pixie and Ghostly Hand that are popular for their bonus Æmber. The set also features many anti-steal cards like Odoac the Patrician and Discombobulator that directly counter Call of the Archons Shadows.

As of Worlds Collide, there are 3 KeyForge products in addition to single Archon decks. The differences are below: