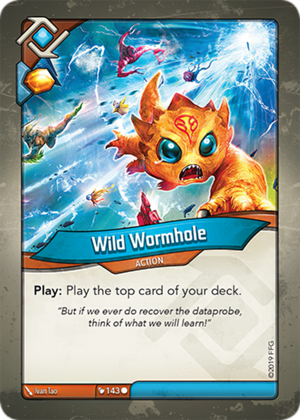 I have 0 Æmber in my Æmber pool and have chosen house Logos to be my active house this turn. I play Wild Wormhole (CoTA 125) and try and play the top card of my deck is Kelifi Dragon (CoTA 037). What happens?
The Kelifi Dragon is returned to the top of the deck. Kelifi Dragon has a play requirement of needing to have 7 Æmber in your Æmber pool, and since you didn’t have any initially (you now have 1 from playing the Wild Wormhole) you don’t have enough to be able to play the Kelifi Dragon. Since you can’t play the card it is returned to the place you tried to play it from, in this case the top of the deck.
Source: Rulebook
I have chosen house Logos to be my active house this turn and start off by playing Library Access (CoTA 115), I then play Wild Wormhole (CoTA 125). In what order do I resolve this combination of effects?
When you play a Wild Wormhole after playing a Library Access the following happens in this order:
Source: Rulebook
Its the first turn of the game and I am going first. I choose house Logos to be the active house and play the card Wild Wormhole (CoTA 125). Can Wild Wormhole’s effect be resolved even though the First Turn Rule is in effect?
Wild Wormhole’s effect can be resolved. The First Turn Rule specifies that players cannot play or discard more than one card from their hand. However it does not prohibit cards from being played or discarded from other game areas, such as your deck.
Source: Rulebook

With the exception of draw, if an ability references the top card of the deck and the deck is empty, the discard pile is not shuffled to form a new deck.
Source: Crucible Cast 4

There is an outstanding issue concerning Wild Wormhole.
Retrieved from "https://archonarcana.com/index.php?title=Wild_Wormhole&oldid=41342"
Categories: