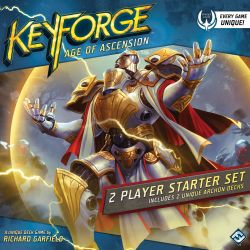 Age of Ascension is the second KeyForge set, announced in a FFG live stream with Richard Garfield on February 12th 2019 and released on May 30, 2019. In Europe, the game launched with a Sealed Vault Tour at UK Games Expo in Birmingham. With 388 players, this is the largest KeyForge Organized Play event to date.

New keywords introduced in Age of Ascension were Alpha, Omega and Deploy: restricting when certain cards can be played and freeing others from the constraints of standard placement.

Age of Ascension introduced Legacy cards. These are cards from a previous set (such as CotA) that are not part of the current set, but on very rare occasions can appear in a deck. Legacy Mavericks are also possible and extremely rare. Legacies occur in about 8.4% of AoA decks, but legacy mavericks are only found in about 1 in 11,000 of them.

Age of Ascension features more board based abilities and less Æmber bonus cards than Call of the Archons, and introduces abilities that punish or stop reaping. This creates a more complex and interactive gameplay, which along with improved house strength balance made Age of Ascension especially enjoyable in the Sealed format.

Iconic and powerful combos include Martian Generosity + Key Abduction in Mars and Drummernaut + Ganger Chieftain in Brobnar. Grump Buggy, Proclamation 346E and especially Heart of the Forest are artifacts that change the flow of the game considerably. Another popular combo is Binate Rupture + Interdimensional Graft in Logos, and Archimedes was one of the best cards in the game before the errata (the previous ruling stated that it could archive the player’s entire battleline when a board wipe was played).

Special rarity cards include Ambassador variants (in Sanctum) for each other house, as well as the three Key Imps. “Fixed” cards are Ortannu the Chained that always appears together with two Ortannu’s Bindings, as well as Timetraveller with Help from Future Self.

Each house also contains a unique Shard artifact, which always appears with at least one other Shard from another house. Cards that always appear with another card are Grumpus Tamer and Project Z.Y.X.

This table indicates how many cards are in each house of Age of Ascension and how many are of each rarity. The bottom section displays the number of reprints in each house and the set from which they originated.

Unlike the Call of the Archons starter set, the Age of Ascension starter set does not include two learning decks, and stun and power cards were replaced by tokens. The AoA starter set includes 2 Archon decks, 6 Key Tokens, 2 Paper Playmats, 2 Chain Tracker cards, 24 Damage tokens, 26 Æmber tokens and 44 Power and Stun tokens.

• All cards in Age of Ascension
• Cards with an errata: Drummernaut, Life for a Life, Yzphyz Knowdrone, Pain Reaction
• Deck registration data
• Competitive success among houses