Mass Mutation is the fourth and current KeyForge set, announced in a FFG live stream[1] on January 30th, 2020 and released on May 29, 2020 in China and Taiwan and July 10, 2020 globally. It includes 259 new cards, for a total of 422 cards[2], making it the largest set yet. It is the first set completely designed by the FFG design team, with Richard Garfield involved only in an advisory role. House Sanctum is returning after being absent from Worlds Collide, but house Brobnar is rotated out for the first time. While Sanctum is returning to Mass Mutation, it has a slightly different flavor from Sanctum in previous sets.

The core theme of the set is mutation, with many creatures returning in a mutated form and other abilities influencing or referring to Mutant creatures. This is the first KeyForge set to be based on a story; the mutations happen after two battling archons open a vault and discover blue-black Æmber. Many of the Mutants in the set will have artwork that feature the blue-black Æmber theme. One Anomaly from Worlds Collide, Orb of Wonder, appears in its original house in this set, but there are no new Anomalies. Mass Mutation does not require any new tokens.

Mass Mutation introduces the Enhance keyword. Unlike other keywords that are in effect during gameplay, the Enhance keyword modifies cards when the deck itself is generated, further driving the uniqueness of each deck. A card with the Enhance keyword will add bonus icons to any other card in the deck. These bonus icons can be Æmber, capture, damage, and draw. The Æmber icon provides an extra Æmber when the card is played, and the capture icon allows the player to capture onto a friendly creature. Damage icons deal one damage to a creature, and draw icons draw a card. These are resolved in the same step as the printed Æmber bonus on cards, and icons are resolved from top to bottom. Each card can have a maximum of 5 bonus icons, which includes normal Æmber bonuses on cards. A card that has been enhanced with a bonus icon is printed with a different color on the decklist, but exactly which bonus icons are added to which cards is not visible from the decklist.

The set will feature Mutant versions of familiar cards. One example is the new card Rad Penny. This card is a newer, mutated version of the card Bad Penny from the first three sets. Instead of its original traits Human and Thief, Rad Penny has the traits Mutant and Thief along with new Play: and Destroyed: effects. The dark colored Æmber is visible in Rad Penny's pocket, and many other Mutant cards in the set have similar visual cues to indicate that they are Mutants. 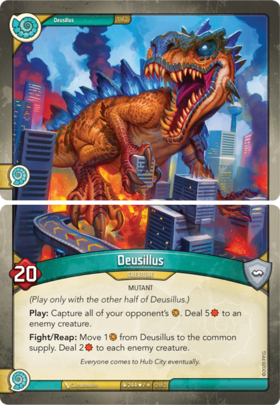 Gigantic creatures always appear as a pair of two cards, although they count as a single creature for the purpose of in-game effects. Every gigantic creature comes with a copy of the It’s Coming... search card in addition to the two creature cards.

Each house in Mass Mutation features a set of 6 Variant Mutant creatures that combine the traits and characteristics of two different houses. For example, house Logos contains Dino-Bot (combining houses Saurian and Logos), Umbra-Bot (combining houses Shadows and Logos), and four other -Bots that merge the characteristics of Logos with another house. House Dis has six creatures that end with -Fiend. In order to reflect which two houses the cards combine, Variant Mutant creatures may gain additional power, card abilities, and/or keywords (like Skirmish or Elusive).

The set also features the Seven Sins cards, a group of seven Special cards that appear in house Dis that all share the Sin trait. A deck that contains the Seven Sins will have between 3-7 of the following cards: Pride, Greed, Wrath, Gluttony, Desire, Sloth, and Envy.

This table indicates how many cards are in each house of Mass Mutation and how many are of each rarity. The bottom section displays the number of reprints in each house and the set from which they originated.

Alongside standard Archon decks, Mass Mutation is available as a 2-player starter set and a deluxe deck that contains all keys and tokens needed for one player. This set does not have a Premium box for purchase.