(Redirected from Winds of Exchange) 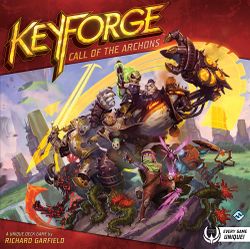 Mass Mutation is the fourth KeyForge set, announced on January 30th, 2020 in an FFG Live stream. It was released on May 29, 2020 in China and Taiwan and on July 10, 2020 globally. It includes more than 250 new cards, for a total of 422 cards, making it the largest set yet. House Sanctum returned after its absence in Worlds Collide, and Brobnar is rotated out for the first time. Mass Mutation centers around Mutant creatures and features many cards with the mutation theme. The set also includes gigantic creatures, which are very powerful creatures that require two cards to play.

The fifth KeyForge set, Dark Tidings, was announced during the Fantasy Flight Games' In-Flight Report on July 29, 2020. After multiple delays due to the COVID-19 pandemic, it was released in March 2021 in Asia, in April in Europe and in finally on May 14 in the United States. Dis is rotated out in order to make room for the Unfathomable, a new, Aquan-based house with many controlling and taxing abilities. The tide mechanic is introduced for the first time, and players can raise the tide in order to enable powerful card effects. 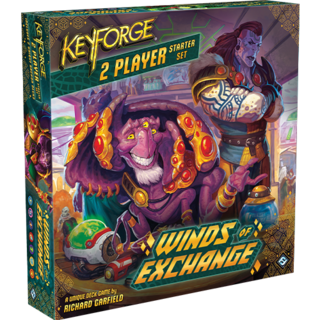 The sixth KeyForge set, Winds of Exchange, was announced on September 10, 2021. However, due to issues with the deckbuilding algorithm, a release date has not yet been confirmed. The set will feature the largest house rotation so far, with Logos, Shadows, and Untamed all leaving the game for the first time. Mars and Brobnar are rotated back in, alongside the introduction of KeyForge's 11th house, the Compacts of Ekwidon[1]. The remaining four houses featured in the set are Sanctum, Saurian, Star Alliance and Unfathomable.

Development on both Sets 7 and 8 has already been confirmed[2][3].