Neutron Shark • Logos • Creature • Rare • Play/Fight/Reap: Destroy an enemy creature or artifact and a friendly creature or artifact. Discard the top card of your deck. If that card is not a Logos card, trigger this effect again. • Artist: Jon Bosco • Card Number: CotA (146), AoA (149), WC (171) 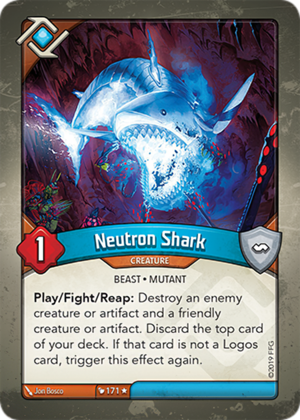 When Neutron Shark destroys itself after destroying an enemy creature, the Neutron Shark's effect still resolves fully, which includes the discarding of the top card of the deck.
If Neutron Shark is played and a player's deck is empty, the effect cannot repeat.
Source: Crucible Cast 4
Each time Neutron Shark's ability is resolved, two creatures are destroyed simultaneously. If eight creatures are destroyed in total, the result is four sequential pairs of simultaneous destruction.
Source: Destroyed
With the exception of draw, if an ability references the top card of the deck and the deck is empty, the discard pile is not shuffled to form a new deck.
Source: Crucible Cast 4
If the ability of Neutron Shark is used to destroy a creature with the Invulnerable keyword, the ability can continue to resolve against the creature with Invulnerable, as it cannot be destroyed.
Source: Repeat•Invulnerable
Retrieved from "https://archonarcana.com/index.php?title=Neutron_Shark&oldid=41314"
Categories: