When a card is destroyed by a card effect or when a creature has damage on it equal to or greater than its power, that card is tagged for destruction. After it is tagged, then that card’s “Destroyed:” abilities trigger, and finally the tagged card is placed into its owner’s discard pile. If multiple cards are simultaneously tagged for destruction, the active player chooses the order in which to resolve the “Destroyed:” abilities of any of those cards. All the tagged cards are put into their owners’ discard piles simultaneously, and the active player chooses the order in which those cards are arranged in their owner’s discard piles.

Once a creature has been tagged for destruction, the only thing that can remove this tag is a replacement effect that uses the word “instead” and replaces the destruction of that creature. An effect that heals a tagged creature does not remove the destroyed tag. An effect may move a tagged creature to a different out-of-play area (such as the hand or archives), but that creature is still considered to have been “destroyed” for the purposes of card effects.

Example: Dan has Archimedes in the middle of 4 other creatures and his opponent plays Gateway to Dis, destroying all creatures. First, all of Dan’s creatures are tagged for destruction. Then Archimedes’ neighbors “Destroyed:” effects resolve, archiving them. The battleline immediately collapses, but Archimedes’ new neighbors have already been tagged for destruction and cannot gain a new “Destroyed:” ability, so they are placed in the discard pile along with Archimedes.

Example: Marcus has a Groggins with a Phoenix Heart in play. His opponent, Janelle, has a Dust Imp with a Soulkeeper, a Drumble, and a Shaffles in play. Marcus fights Dust Imp with Groggins, causing Dust Imp to be tagged for destruction. Dust Imp’s “Destroyed:” ability and the “Destroyed:” ability that Soulkeeper grants it both trigger simultaneously. Marcus chooses to let his opponent gain the 2 Æmber first, then resolve the Soulkeeper, which will destroy Marcus’s most powerful creature— Groggins. When Groggins is tagged for destruction, the Phoenix Heart attached to it resolves, returning Groggins to Marcus’s hand and dealing 3 damage to each other creature. This damage then tags Drumble and Shaffles for destruction. Finally, all the destroyed creatures still in play (Dust Imp, Drumble, and Shaffles) are placed in their owner’s discard pile in the order of the active player (Marcus’s) choice.

Following the rule that abilities can only resolve while they are in play, Brad Andres clarified that when a Dust Imp (upgraded with a Biomatrix Backup) is destroyed, it could resolve in two ways, with the order being chosen by the active player. If the Dust Imp's Destroyed: ability is resolved first, its controller would gain 2 Æmber, and then the card would be moved to the owner's archive. If the Destroyed: ability of Biomatrix Backup is resolved first, then the Dust Imp is placed in its owner's archive, from which Dust Imp's Destroyed: ability cannot resolve, as it it no longer in play.
Source

FFG has clarified that nothing goes to the discard pile until all the Destroyed: abilities are done resolving. Destroyed: abilities are unusual in that they can actually interrupt each other and cause this kind of effect nesting. Creatures can be tagged for destruction by something like Soulkeeper and then other effects will interrupt before they actually hit the discard pile. The key is that everything tagged for destruction from these kinds of chain reactions will go to the discard pile simultaneously, and therefore in the order of the active player's choosing.

The cards are not considered to be "destroyed" until the cards are placed in the discard pile; a Tolas that has been upgraded with a Soulkeeper that is being destroyed won't ever earn an Æmber because Tolas and any creature Soulkeeper destroys will both be destroyed at the same time. 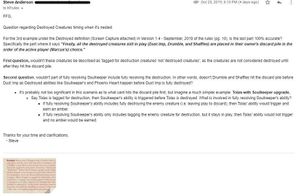 While the rules for Destroyed say "Players cannot choose to sacrifice or destroy a creature that is already tagged for destruction," FFG have confirmed that this restriction should apply to all card types.
Source