There are two formats in KeyForge Organized Play: Archon and Sealed. In Archon tournaments, players bring their own deck, while in Sealed players receive a new deck at the tournament and open it only at the start of the event. The standard way to play both of these formats is Solo, where each player uses a single deck throughout the tournament.

Both Archon and Sealed tournaments can also be run with any of the following variants: Adaptive, Auction, Reversal, Survival and Triad. Additionally, matches are played as one-game matches or best-of-three matches.

Aembershards awarded at each event tier

Æmbershards are digital rewards earned by players registering decks in the Master Vault, as well as by playing in all Organized Play events, from store-level tournaments to Vault Tours. Æmbershards can then be redeemed for physical prizes at events with a Prize Wall (currently, only at Vault Tours).

KeyForge decks earn Power levels by successfully competing in Organized Play events. Power level 8, awarded to Vault Tour winners, is currently the highest awarded level. Power levels are permanent, and once earned, decks cannot lose them by performing poorly. Fantasy Flight has hinted that there may be power level requirements to enter certain events in the future.

Chains can be gained or lost after each tournament, but Power levels are never lost. Only decks with Power level 3 or lower can enter Chainbound events. This is currently the only type of KeyForge event with a Power level restriction.

Launched in November 2019, monthly Store Leaderboards track Æmbershards earned by players in weekly Chainbound and Sealed events. A store can run one of each of these events every week. At the end of the month, the Top 4 players receive an alternate art card deck. Wins for both Chainbound Events and Weekly Sealed events are tracked in the Master Vault.

Each store can run up to two Store Championships every year, in one of the following formats: Archon Solo, Archon Reversal, Sealed Solo, and Sealed 2 Deck Survival. Apart from physical prizes for participants and top finishers, participation is also rewarded with 5 Æmbershards, each win another Æmbershard, while the winner receives 40 additional Æmbershards.The winner's deck will gain Power level 3, the finalist's Power level 2, while the remaining Top 8 decks will gain Power level 1.

Grand Championships can be run in one of the following formats: Archon Triad, Archon Survival, Sealed Adaptive, Sealed Triad.

The 2020 World Championship was to be a team event with each team consisting of three players and only one of them needing an invitation.

The Vault Tour is a series of high-level events open to all players and all decks. The main events are always two day tournaments: a Day 1 consisting of multiple Swiss rounds, with the best players progressing to a Day 2 single elimination top cut. Formats used for Vault Tours are Archon Solo, Archon Survival, Archon Triad and Sealed Solo. In Sealed Solo, players open three current set decks and choose one to play in the event. 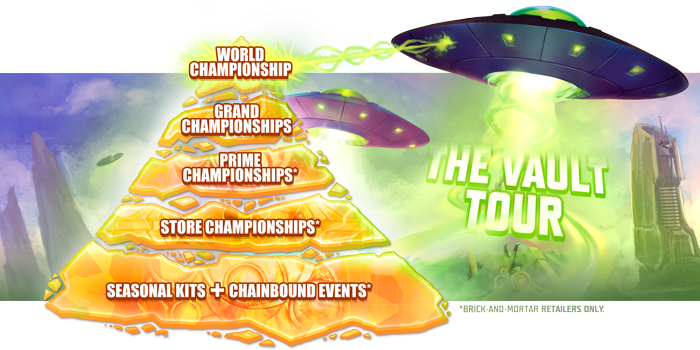 VaultWarrior is a series of high-level KeyForge tournaments focusing on the current set and offering cash prizes. All VaultWarrior events are held in the Archon format. There are three tiers of VaultWarrior tournaments: Tryouts, Qualifiers, and the VaultWarrior Championship. Tryouts are local events that allow players to win unique physical prizes and to earn a free seat to a future Qualifier event. Players participating in Tryouts must use decks from the most recent KeyForge set. Qualifiers, on the other hand, require players to bring decks from each of the three most recent sets. Qualifiers are three-day events that offer enticing cash prizes and invitations to the upcoming VaultWarrior Championship. The winner of each Qualifier in 2020 will take home $10,000.

The VaultWarrior Championship is an invitation-only event held in the Archon Adaptive variant using decks from the most recent set. Players can earn an invite to the Championship by ranking top 32 or better in a Qualifier or through the Last Chance Qualifier immediately beforehand. The VaultWarrior Championship offers the largest prize pool of all events in the series, with a total of $25,000 awarded to the winner and an additional $75,000 distributed to top performing players.