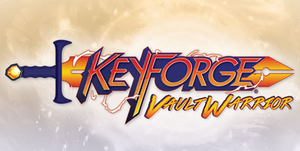 VaultWarrior is a KeyForge Pro-level series with a focus on cash prizes rather than a prize wall. It is the first event series that Fantasy Flight Games has hosted with cash prizes, and it is the only tier of KeyForge Organized Play that is set limited. The name of the event series comes from a VaultWarrior, a type of creature in the Crucible that is famous for successfully traveling with archons and cracking open vaults. All VaultWarrior tournaments are held in the archon format, with several different variants possible and a preference for best-of-three matches. Power levels awarded by the VaultWarrior series have not yet been announced.

Tryouts are local events, run by stores or tournament organizers, in which a player can win a free seat to an upcoming VaultWarrior Qualifier event, as well as unique physical prizes. Tryouts do not offer cash prizes.

Qualifiers are events that allow top performing players to win cash prizes and to qualify for an upcoming VaultWarrior Championship. Any player can participate by either earning a free seat through a Tryout or by paying the entry fee. The top 32 players of each Qualifier will get invitations to the upcoming VaultWarrior Championship, and the winner of each Qualifier will win a flight to the event.

The VaultWarrior Championship is an invitation-only event with a large cash prize pool. The Championship takes place over several days and is preceded by a Last Chance Qualifier event in which players have a final opportunity to earn an invitation.

The information in this section may be out of date. VaultWarrior events may be delayed due to the Coronavirus affecting prize kits. Information on this page will be updated to reflect any announcements from Fantasy Flight Games.
"It's a big step forward for KeyForge, and I'm just looking forward to this bright future." 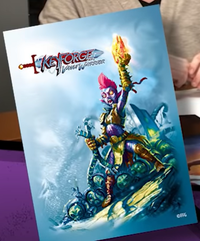 For the first year, all Tryouts require decks from the current set, and acceptable variants are Archon Adaptive, Triad, and Solo Best of 3. There will be a couple hundred Tryouts globally. While these events will take place all around the world, a large number of them will congregate around upcoming Qualifiers to help reduce travel costs for players[2].

The VaultWarrior Tryouts were originally scheduled to begin in March 2020, but the prize kits were delayed to the Coronavirus outbreak. Fantasy Flight has accordingly delayed the start of the Tryouts, and they will update with more information regarding dates later[3].

If a player wins a Tryout, they are given free entry to a Qualifier event of their choice. However, if a player already has an unspent entry fee from another Tryout, they cannot earn another free entry until they spend their first one. In the situation where a player would win a second free entry but has not spent their first, the free entry will pass down to the second place player[4].

Throughout the year, there will be ten Qualifier events hosted in ten cities, the first of which was scheduled for Bologna, Italy during March. However, due to the coronavirus outbreak, this event date might be delayed. Fantasy Flight Games will give an updated schedule once they make a decision[3].

There will be four Qualifiers in North America (one likely in Canada), several in Europe, and some others possibly outside these regions[4]. Locations for these high level tournaments target cities that have high event attendance and are easy to reach through travel. Each Qualifier is designed to hold a large number of players, and players are allowed to attend as many Qualifiers as they like. The entry fee for each Qualifier is slightly above that of a Vault Tour due to the cash prize support, but entry fees vary somewhat by country[4]. The Qualifier events are expected to finish around either August or September, with the exception of the Last Chance Qualifier event[2].

Each Qualifier event is a three-day event offering a $10,000 prize pool. The winner of each event will take home $2500 and receive a flight to the upcoming VaultWarrior Championship. There will be additional cash prizes for other top performing players based on ranking. Qualifiers also have several side events, some of which may provide rewards for future events[2].

The first two days of each Qualifier is the main event, and the third day contains elimination rounds. Day 1 of each Qualifier uses decks from the current set in one of the Archon Adaptive, Triad, or Solo Best of 3 variants. On Day 2, players must bring two decks, one from each of the previous two sets. Day 2 uses a new sub-variant called 2 Deck Elimination, in which a player reveals their two decks to their opponent and their opponent chooses one deck to ban. After the deck banning phase, players then play a match with their remaining decks in one of the Archon Adaptive, Solo Best of 3, or Reversal variants. There is a cut for Day 3 based on player performance during the first two days of the Qualifier. The final day contains elimination rounds, in which players must use one of the decks they played on either Day 1 or Day 2. The variant used on Day 3 can be any of Adaptive, Triad, Solo Best of 3, or Reversal.

The Last Chance Qualifier tournaments will take place later in the year in Miami, Florida, on the two days immediately before the VaultWarrior Championship. They are an alternative for players to obtain an invitation to the Championship if they do not already have one from a Qualifier event; players who already have an invitation are not allowed to participate[5]. The Last Chance Qualifier will also have several side events with a focus on the Sealed format. These side events will offer physical prizes and Æmbershards as rewards.

There will be four Last Chance Qualifier tournaments that are staggered throughout the Thursday and Friday before the Championship. Each tournament lasts five rounds and will be held in the Archon Adaptive variant using the current set. Players must achieve a record of 4-1 or better in order to qualify for the Championship event[5]. If a player misses the cut for one tournament, they can drop and sign up for another but must pay the additional entry fee.

The 2020 VaultWarrior Championship will take place in Miami, Florida on a Saturday and Sunday in the second half of the year. It is an invitation-only event with a total prize pool of $100,000, in which the winner will take home $25,000. The format of the Championship will be entirely Archon Adaptive, and players must bring decks from the current set. The first day will be a main event, and the second day will contain elimination rounds.

A Sealed Solo Vault Tour in Miami will coincide with the Championship event to allow players who do not have an invitation to compete in a competitive tier event that weekend.

All VaultWarrior tournaments are held in the Archon format, but the exact tournament structure of each Tryout and Qualifier will vary by event. Each event will use one of the eligible Archon variants displayed below depending on its tournament tier. Qualifiers may use a different variant for each day of the event.

The VaultWarrior series focuses on cash and physical prizing. None of the VaultWarrior main events award Æmbershards as prizes, but players can receive Æmbershards for Last Chance Qualifiers and for side events at Tryouts. The total prize pool for the entire series is $200,000. The winner of each Qualifier event will take home $2500, and the champion of the VaultWarrior Championship will receive $25,000. Additional cash prizes will be awarded to other top performing players based on ranking.

For the first year of the series, Gamegenic has designed several prizes that are exclusive to these events. One such prize is a set of VaultWarrior sleeves that will not be available elsewhere[6]. Additional physical prizes for the VaultWarrior series will be announced.