(Redirected from Legacy and Maverick Frequencies)

KeyForge card rarity varies based on card type and set. Unfortunately, the exact frequencies of each card type are unknown due to the secretive nature of the deck building algorithm. However, some rarity estimates have been made by evaluating large sample sizes of decks from each set.

Based on a sample size of 100,000 decks from each set, the following numbers are estimates for the likelihood of a single card being a specific card type:[1] 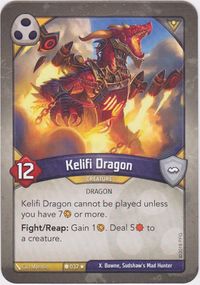 A maverick Kelifi Dragon from CotA

Each set has different rates of legacies, mavericks, legacy mavericks, and anomalies occurring. The following numbers are estimates based on a large sample size of each set.[1] Actual rates of each card type frequency may fluctuate over time.

Decks printed in certain languages have the following restrictions: