As the game grows, new players are going to join the game after sets have already released. While the best way to get familiar with a set is to play it, not everyone is going to have that luxury. The more sets have been released, the harder it is going to get.


So here is the first essay on Call of the Archons (CotA for short), the very first KeyForge set. I’ll be looking to familiarize you with the key cards, combos and deck archetypes in the set, so if you face those you will have some idea what to look out for.


This Essay is written at the time of Worlds Collide, and as such is keeping the current Metagame in mind.

The most popular and powerful houses in CotA are, in rough order, Shadows, Dis, Logos and Untamed, with Sanctum and Mars leading over Brobnar.


Shadows - With the heavy steal abilities in the set, Shadows looks to generate Æmber while also controlling your Opponent’s Æmber. Cards like Urchin, Bait and Switch, Nerve Blast and Relentless Whispers all in the common slot, it is not uncommon to see Shadows lineups made up almost entirely from out of hand steal. The three cards in Worlds Collide, Gargantodon, Odoac the Patrician and Discombobulator are keeping this house somewhat in check.


Dis- The house of disruption, Dis is the house with the most cards that can put a wrench in your plans. With (arguably) the most powerful common in the game, Control the Weak, Dis is a house to fear. Other commons such as Ember Imp, Succubus and Mind Barb are also sought after pieces to make your opponent suffer.


Logos - Providing decks with speed and efficiency Logos looks to filter out certain cards from the deck, increasing card advantage and provide some consistency to decks. With cards like Library Access, Mother, Labwork, Wild Wormhole and Phase Shift in the common slot, you can expect Logos houses to be able to draw a lot of cards and play some out of house things as well.


Untamed - Is the burst house with the least amount of Æmber control and the combos that generated the most Æmber along with ability to forge keys easily out of order. House Untamed looks to go fast into the racing game and win without letting your opponent react. Commons like Dust Pixie, Hunting Witch and Full Moon, you can expect CotA Untamed to be able to generate enough Æmber for a key or more in a single turn. Paired with Key Charge and you won’t even get an opportunity to stop the forge.


Sanctum - The original big armored bodies, protection of other creatures and Æmber capture, Sanctum’s power comes from developing a strong board more than flashy cards. With very few great cards in the common slot, powerful Sanctum lineups are more rare. Still, it boasts two extremely powerful cards in the Uncommon slot: possibly the best Æmber control card on it’s own Doorstep to Heaven and one of the best board clears in the game The Spirit’s Way.


Mars - Known for producing a high number of house lineups that don’t really work, when it does work, it can be spectacular. House Mars can’t really be analyzed through it’s Commons as the most powerful Mars lineups seem to rely on a few powerful cards to tie it all together. Battle Fleet and Key Abduction are the most well known for clean power, but a full analysis of the house is needed to see it’s entire potential.


Brobnar - The house that wants to fight but does it poorly. Lacking abilities to survive combat such as Skirmish and Armor, Brobnar is looking to pick fights but quickly falls apart doing so. The best Brobnar lineups will look to employ ready and fight abilities to do the fighting while using other cards to control the board and actually reap with creatures at every opportunity. Cards like Punch, Gauntlet of Command and Anger provide Æmber and speed, while Coward’s End and Champion’s Challenge can clear the board. Brobnar also has some effective Æmber control in Bumpsy, Grenade Snib and Screechbomb.

When reading an archon card it is best if you’re familiar with the entire card pool, or at least all the commons and uncommons, but that may not be feasible for people joining the game at a later date. I compiled a list of cards the categories that you are most likely to need play around. Sorted by Rarity and then potency

Only the ones in large quantities, which are usually conditional.
Effervescent Principle | Doorstep to Heaven, Too Much to Protect, Interdimensional Graft, Burn the Stockpile, Drumble, Gatekeeper, Pandemonium, Unguarded Camp | Hypnotic Command, Shatter Storm, Routine Job (when it’s 3 or more), One Last Job.

These don’t fall in the other categories, but you really need to know about before going into the game.
Control the Weak, Arise!, Key Charge, Ember Imp | Chota Hazri, Key Abduction, Scrambler Storm, Mimicry | Dysania, Restringuntus

You can view a full list of Vault Tour winning decks, but I want to highlight a few of the most famous decks. 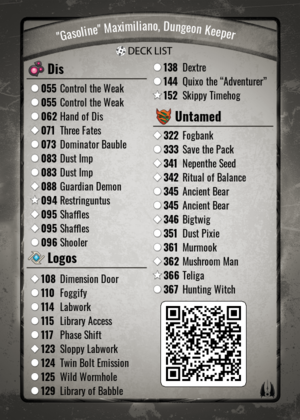 The first deck to be piloted to a double vault tour win by George Keagle. The first time it won a vault tour was before the Library Access Errata, that allowed the deck to “go infinite” by using Nepenthe Seed to get the Library Access back and replay it on the same turn. This would result in most if not all of the deck being in hand, and a Control the Weak to be played every single turn for the rest of the game. After the Errata, some people would argue the deck is even scarier, with George not leaning into the combo, he is able to set up powerful lockouts with the Control the Weak and Restringuntus.

The second deck to be piloted to a double vault tour win by Jakub “Dunkoro” Nosal, the deck is extremely fast and can make big plays in both Logos and Mars with Library Access or the double Battle Fleet Key Abduction.

Bahamut "Alp Larissa" Heifetz and Bombfoot, the Aeronaut of the Pike

Bahamut is the only power level 8 deck that has not won a single game in the finals, back when Vault Tour finals in the US were Adaptive. After Bombfoot won both first games, Nathan Westlake won the bid for it with 1 chain and won the match with it against Brooks L. Clark.