The 2019 Seattle Vault Tour was the first ever sealed solo Vault Tour, held the same day as the Eindhoven Vault Tour but in a later time zone. The event took place as part of Emerald City Comic Con, a comic book convention in Seattle, WA, United States, but the actual tournament was held off site in the Hyatt Regency. For this reason, players were not required to buy a convention badge to participate in the Vault Tour. There were a total of 175 players participating in the event. Unfortunately, while the event was streamed, the videos from the tournament were not saved.

Champion Yaro Tkatchenko, a local Seattle player, won the adaptive finals 2-0 by winning with both his deck and his opponent's. Another local player awarded Yaro with a personally designed trophy for his victory.[1]

Note: This information is incomplete. If you know which decks reached top 8, please contact us. 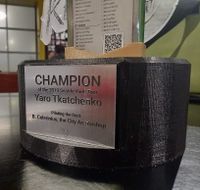 Trophy made for the Seattle Vault Tour champion

"One of the most important things we can learn from the Vault Tour is that the game's top players are keenly aware that KeyForge is not a "battle" game. You're not trying to destroy your opponent. [...] Your goal is simply to be the first Archon to forge three keys… and doing that requires Æmber."

— What is a KeyForge Metagame?