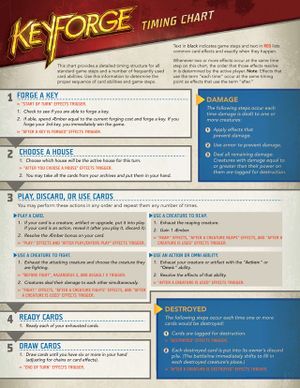 “The active player makes all necessary decisions for all card abilities or timing conflicts that need to resolve during their turn.”

One of the most interesting aspects of KeyForge is how the multitude of abilities resolve, and the extraordinary power the timing of these resolutions gives the Active Player. The ordering of abilities is one of the more confusing concepts for new players to grasp, and hopefully this article will help both new and experienced players gain a deeper understanding of how timing in KeyForge works, and how to use this to your advantage in play.

First, we’ll cover two key definitions, the first of which is simple; The active player is the player who is currently taking their turn. The second one is slightly more difficult. What exactly is a timing conflict? A timing conflict is a point during the turn sequence at which point two or more abilities are available to resolve. For example, let’s say I have a Hayden Oswin that has been upgraded with a Stunner, as well as the artifact Uncharted Lands in play. If I’m the active player, and I use Hayden Oswin to reap, there are three Reap: abilities that are available to resolve:

In this case, since I’m the active player, I choose to resolve the Æmber move first, then I stun an enemy creature, then lastly I gain 1 Æmber through Hayden Oswin's ability. The important thing is that each of these abilities is resolved one at a time, and each ability resolves completely before moving on to the next ability to resolve.

It’s relatively obvious that Bold text abilities all happen in the same timing window, but it’s important to remember that timing conflicts can happen at any point in the turn sequence, and they must be resolved before proceeding to the next step. Say for example, my opponent has General Order 24 in play, and I have only Director of Z.Y.X. in my battleline. Both my opponent’s artifact and my creature share a timing window:

In this case it’s almost always advantageous to resolve the ability from Director of Z.Y.X. first, so I choose to do that, and then destroy Director Z.Y.X. using the ability of General Order 24.

Another interesting way to use Timing to your advantage is illustrated through the example of Nexus and Spectral Tunneler. As you move through the turn sequence, it’s possible for abilities to be gained in such a way that they can be resolved within the current window of the turn sequence.

Where Things Get Weird

One of the most difficult concepts in KeyForge is how destruction and Destroyed: abilities work, and a lot of this is due to how timing works in KeyForge. To reiterate from above, abilities resolve one at a time in the order of the active player’s choosing. The other important thing to remember is that according to the definition of ability, “Abilities on a creature, artifact, or upgrade are only active (and can only be triggered) while that card is in play, unless the ability explicitly references being used from an out-of-play area.” The impact that second definition can have on resolving Destroyed: abilities is massive, and is where the active player can make some crucial choices in ordering.

We’ll start with a simple example: My opponent’s Dust Imp that has been upgraded with Biomatrix Backup. Walking this through step by step:

Note that at step 4 above, the active player could have chosen to resolve Dust Imp’s ability first (gaining 2 Æmber), then resolved the Biomatrix Backup to put the Dust Imp into the archives.

Applying the example of what happened with Spectral Tunneler and Nexus, if a Destroyed: ability results in more creatures being tagged for destruction, there is the possibility that more Destroyed: abilities will be able to be resolved, as noted in this example from the rulebook (edited for clarity):

Wrapping Up and Best Practices

Timing in KeyForge creates a great deal of flexibility, allowing the active player to make powerful, game-impacting decisions. As you play through your turn, focus on where you are in the turn sequence, what abilities are available to be resolved, and how you can best order the resolution of those abilities to your favor.

Blinkingline is a contributor to Archon Arcana and can often be found answering rules questions, judging tournaments, or drinking whiskey. Feel free to reach out to him on the Archon Arcana Discord.