Po’s Pixies • Untamed • Creature • Rare • Elusive. (The first time this creature is attacked each turn, no damage is dealt.) 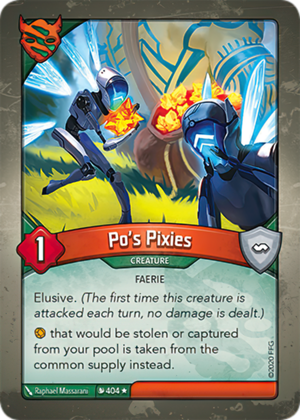 I have Po’s Pixies (AoA 362) and my opponent has two copies of Sir Marrows (AoA 223). I reap with Po’s Poxies. Do both of the Sir Marrows capture Æmber from the common supply?
Yes. Each of the Sir Marrows sees the Æmber that you gain from reaping, and both will try to capture it. Normally only one of them would be able to successfully capture it, however, because Po’s Pixies replaces the capture attempt with a capture from the common supply, when the second Sir Marrows attempts to capture the same specific Æmber, it is still available. Therefore both of the Sir Marrows will attempt to capture the same Æmber, one by one, and each attempt will be replaced with a capture from the common supply.
Source: Rulebook
I play the card Nerve Blast (CoTA 276) while my opponent has 2 Æmber in their pool and controls a Po’s Pixies (AoA 362). Am I able to deal 2 damage with Nerve Blast’s effect?
Yes. Po’s Pixies has a replacement effect that changes where the stolen Æmber is taken from (the common supply instead of its controller’s pool). However, that Æmber is still considered to be “stolen,” and therefore the “if you do” condition of Nerve Blast has been satisfied.
Source: Rulebook
Retrieved from "https://archonarcana.com/index.php?title=Po’s_Pixies&oldid=41319"
Categories: