Exhume • Dis • Action • Common • Play: Choose a creature in your discard pile. You may play that creature as if it belonged to the active house and was in your hand. • Artist: Brolken • Card Number: AoA (059), WC (074) 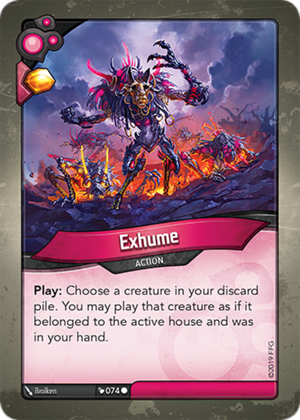 Play: Choose a creature in your discard pile. You may play that creature as if it belonged to the active house and was in your hand.
AoA 059
WC 074
Artist: Brolken

If I play Exhume (AoA 059) and choose an Explo-rover (WC 297) in my discard pile, can I play it as an upgrade, or must I play it as a creature?
You can play Explo-rover as either an upgrade or a creature with Exhume. When Exhume specifies “creature” in your discard pile, this is a play restriction on which card in your discard pile you can choose, but not a requirement that that card must remain a creature as you play it.
Source: Rulebook
If I play Exhume and target half a Gigantic creature in the discard pile for which I have the other half in my hand, does the Gigantic creature get played or does the effect of Exhume fail?
Any card that would let you play a single card (Exhume, Wild Wormhole, Lateral Shift, Phase Shift, Helper Bot, etc.) cannot play a Gigantic creature because that creature is two cards while out of play. Even if you have the other half of the Gigantic creature in your hand, essentially the effect tries to target a single card, but then fails because that single card cannot be played on its own.

Note from the Arcanists: Some of the cards mentioned in this ruling we believe may have been cited inadvertently. We've reached out to FFG for further clarification from FFG and will update this when we receive more information.