The Pale Star • Dis • Artifact • Rare • Omni: Destroy The Pale Star. For the remainder of the turn, each creature is considered to have 1 power and 0 armor. • Artist: Nasrul Hakim • Card Number: MM (049) 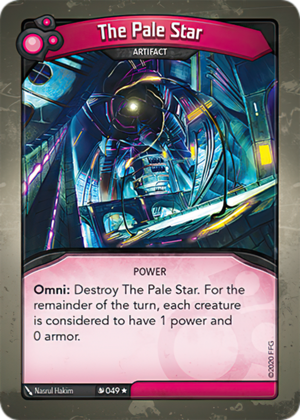 Rare
Power
Omni: Destroy The Pale Star. For the remainder of the turn, each creature is considered to have 1 power and 0 armor.
MM 049
Artist: Nasrul Hakim

I have the The Pale Star (MM 049), Chonkers (MM 396), and Dark Æmber Vault (MM 001) in play. Chonkers has 1 printed power, one +1 power counter, and +2 power from the Dark Æmber Vault. If I sacrifice The Pale Star, how much power will Chonkers have? If I attack with Chonkers and it gains another +1 power counter this turn, how much power will it have then?
1 Power in both cases. Restrictive (“cannot”) effects overrule permissive (“may”) effects, and The Pale Star is essentially saying “creatures cannot have power other than 1 and armor other than 0”, So Chonkers will still only have 1 power this turn, despite any other counters or card effects that would usually increase its power, even if those counters are added after The Pale Star’s ability has triggered.
Source: Rulebook

If an ability states an effect is applied to "each creature", the effect is resolved for both Friendly and Enemy creatures.
Source: Rulebook
FFG has clarified that The Pale Star's ability cancels any power and armor bonuses granted by other card effects granted by upgrades. "The creature is essentially modified by all buffs, and then The Pale Star drops it to 0/1." This overrides the effects of +1 power counters and card effects like Dark Æmber Vault as well.
Source 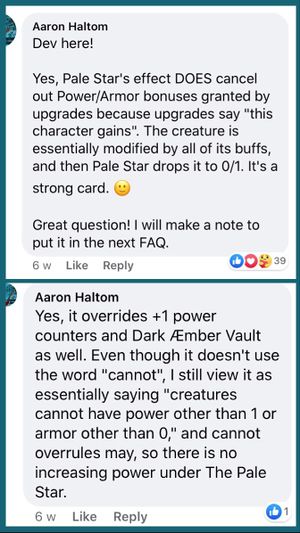