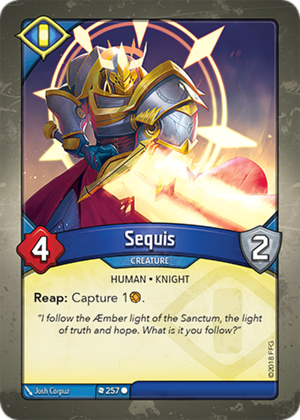 .
“I follow the Æmber light of the Sanctum, the light of truth and hope. What is it you follow?”
CotA 257
Artist: Josh Corpuz

I reap with Replicator (CoTA 150), and use its ability to trigger the reap effect of my opponent’s Sequis (CoTA 257) as if I controlled it. Which player’s pool does Sequis capture Æmber from?
Sequis captures 1 Æmber from your opponent’s pool. You are using Sequis as if you controlled it, so the default capture rules cause the Æmber to be captured from your opponent’s pool.
Source: Rulebook
Retrieved from "https://archonarcana.com/index.php?title=Sequis&oldid=41328"
Categories: