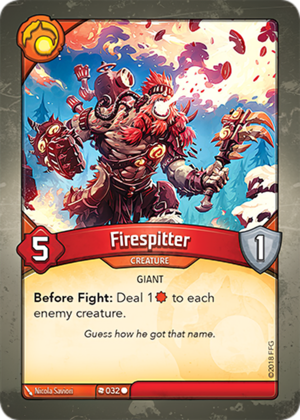 to each enemy creature.
Guess how he got that name.
CotA 032
Artist: Nicola Saviori

If I use Smite (AoA 224) to make my Firespitter (CotA 032) fight my opponent's 1 power creature which has 2 neighboring 1 power creatures, each of which has neighboring 2 power creatures on the flanks, will Smite destroy the 2 power flank creatures?
No. Smite's damage effect refers to the neighbors that the defending creature had immediately before leaving play. As the 1 power defending creature will leave play at the same time as its 1 power neighbors due to Firespitter's Before Fight: ability, Smite's damage effect will fail because the creatures it refers to are no longer in play.
Source: Rulebook
Retrieved from "https://archonarcana.com/index.php?title=Firespitter&oldid=31639"
Categories: