In September 2018, Fantasy Flight announced a series of "introductory fiction" for the KeyForge universe. The series included 7 stories, all told from the perspective of Inka the Spider. Each story covered a different house from the Call of the Archons set.

Starting in 2020, a series of books related to the card game were announced. So far, a short story anthology, an art book, and a novel have been published. 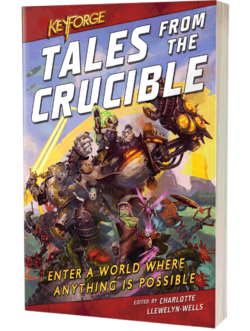 Welcome to the Crucible – an artificial planet larger than our sun – an ever-growing patchwork of countless other worlds, filled with creatures, sentient beings and societies stolen from across the universe by the mythical Architects. Across this dizzying juxtaposition of alien biospheres, the enigmatic and godlike Archons seek to unlock the secrets at the heart of the Crucible. Everyone else is just trying to survive… 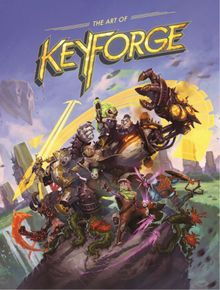 Explore the Crucible and the distinct houses of KeyForge through a gorgeously designed collection of the game's masterfully created art! This vibrant artbook explores KeyForge's contest of power and wit with hundreds of illustrations that demonstrate the countless possibilities that are available across every deck, showcasing the whimsical and exciting art in glorious detail!

This tome is a must-have for readers ranging from the most dedicated Archons to casual fans of games and science-fantasy! Join the legions of players who've made this game a smash success, and witness the Crucible for yourself! 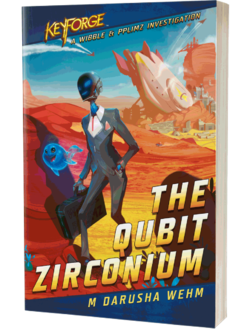 This 336-page science fantasy novel by M Darusha Wehm follows the adventures of two private investigators first introduced in the Tales from the Crucible anthology. Published by Aconyte Books in April 2021. Cover art by Natalie Russo.

Wibble & Pplimz, the Crucible’s most unusual private investigators, must set off from their office in Hub City to clear the name of a former client. Along the way, their investigation broadens from a simple accusation of theft to include a missing person, a potential murder, and a highly unusual gem. Four interlinking incidents take them across the Crucible, as they attempt to solve the case. But there’s something more sinister lurking underneath: evidence of a secret society that aims to discover the power of the Architects, and forever change the nature of the Crucible itself.

M DARUSHA WEHM is the Nebula Award-nominated and Sir Julius Vogel Award-winning author of the interactive fiction game The Martian Job, several SF novels, and the Andersson Dexter cyberpunk detective series. They have also written the Devi Jones: Locker YA series, and the coming-of-age novel The Home for Wayward Parrots. Originally from Canada, Darusha lives in New Zealand after spending several years sailing the Pacific.