These are the guidelines we use for ABR's weekly tournaments:

When the tournament round is announced, check Challonge and find your matchup. The player on the top of the pairing will create the game on TCO, Player 2 will join the game. If you are connected via voice chat, go to the game room that matches your table number and your opponent will meet you there.

When Player 1 creates the game on TCO, they should select the following options: 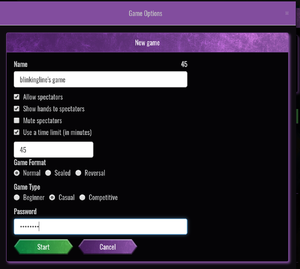 If the timer in your game runs out, we use the official rules for going to time:

When time is called for the round, the player who is currently taking their turn finishes their turn. If that player does not achieve victory by the end of their turn, then their opponent may take one last turn. If neither player has achieved victory (forged three Keys) at the end of the opponent’s last turn, they must follow the steps below, in order, to determine who receives a win for the current game. That player’s opponent receives a loss for the game.

Note: These steps take place in a post-game tiebreaker phase. While following these steps, neither player is considered to be currently taking their turn.