Essay:Chess Clocks for The Crucible Online

Many KeyForge players have expressed an interest in the use of chess clocks as a means to provide an alternative to the current Going to Time rules. While the developers of The Crucible Online (TCO) have no current plans to add an option to provide them for online play, by using another website to provide the chess clock independently of the TCO platform, players can still utilize chess clocks if they so choose. This essay won't delve into the reasons why players may wish to use chess clocks while playing KeyForge, but rather detail a method in which the experience of chess clocks can be applied to KeyForge.

The trickiest bit about making chess clocks work for two different players is that most online versions of chess clocks are designed for physical play, where both players are sitting across a table from one another. Thankfully, there is one website that has implemented a version of a chess clock that allows both players to interact with the same virtual chess clock. The chess clock can be found here [1]

You can do the following steps in a separate browser window on your computer. If you prefer to make the interaction feel a bit more like a physical chess clock, you can do these steps on a browser on your mobile device.

Set up the starting minutes

Since there's no current way to handle matchmaking on TCO with a chess clock, you'll need to use an alternate method (such as Discord) to find a willing opponent. Once both players agree, one player should create the game on TCO as well as the game clock. To set up the game clock, simply type in the starting minutes for each player in the box on the right labeled "Starting Minutes". As a baseline, I recommend 17 minutes per player. Click the "Start New Clock" button. 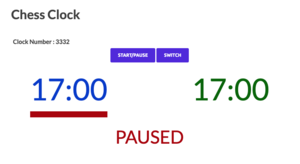 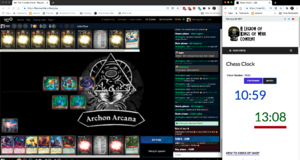 Using chess clocks, there's a new additional win condition for KeyForge; a player wins the game when they forge 3 keys OR when their opponent runs out of time on their clock. When a player's clocks completely down, they should concede the game on TCO.

While I find playing with chess clocks using a round timer that is evenly split between the players very enjoyable, you could also choose to give each player a significantly shorter amount of time (say, 8 minutes) to play "SpeedForge". Yet another application that works well is to use the chess clocks as a handicapping mechanism. While this takes longer to set up (you have to let the timer run down manually and then stop it), it creates an interesting dynamic that can really test a player's knowledge of their deck and piloting skills.

Blinkingline is a contributor to Archon Arcana and can often be found answering rules questions, judging tournaments, or drinking whiskey. Feel free to reach out to him on the Archon Arcana Discord.