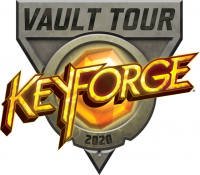 The Vault Tour is a series of top level KeyForge Organized Play tournaments held throughout Europe and North America. Vault Tours are open to all players and all decks, with no restrictions based on deck power level or set. Chains gained in Chainbound events do not apply in Vault Tour events.

Held throughout a weekend, Vault Tours attract hundreds of players to play in one or two main events and numerous side events. The main events are always two day tournaments: a Day 1 consisting of multiple Swiss rounds, with the best players progressing to a Day 2 single elimination top cut.

The winner of each Vault Tour is awarded free flight and accommodation for a later Vault Tour. Unlike the upcoming VaultWarrior series, no cash prizes are awarded at Vault Tours.

Æmbershards and power levels are awarded to all participating players and decks. Æmbershards from all Vault Tours count towards the Vault Tour Leaderboard.

Invites to the 2020 KeyForge World Championships event will be awarded to the Top 100 players on the Vault Tour Leaderboard after the Sealed Solo event at Fort Worth, TX, USA on Feb. 6-9. 2020. If a player at any point enters the Top 100 by participating in a subsequent Vault Tour before Worlds 2020 (there are currently 4 scheduled Vault Tours between the Fort Worth event and the World Championships), they will also receive an invite. After the World 2020 Championships, the Vault Tour 2019-20 season will conclude and the leaderboard will reset.

Each Vault Tour also features a Prize Wall where players can redeem Æmbershards for unique prizes. This is currently the only way to redeem Æmbershards gained by discovering decks in the Master Vault, as well as playing at Vault Tours and all other events within KeyForge Organized Play.

The first Vault Tours were held in March 2019 in Eindhoven (NL) and Seattle (WA). Vault Tours in the US were initially run by Cascade Games, but from September 2019 are run by Yeti Gaming. In adaptive finals, the winner's deck was not always the deck that won most games in the final.

At the Collinsville VT in September, George Keagle became the first two-time Vault Tour winner, winning for the second time with the same deck. Jakub Nosal was the second player to achieve this, just a few weeks later at the Madrid VT. In November, Nathan Westlake became the first player to win both an Archon and a Sealed Vault Tour (thus, winning with two different decks).

The final events of the 2019-20 season will be held on the weekend of April 24-26 in Hannover, Germany and Alameda, California, USA.