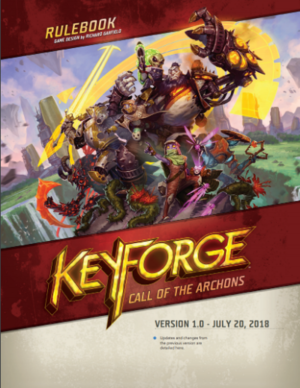 Welcome to the Crucible...

You are an Archon. Hailed by some as a god, respected by others for your wisdom, you were born—or perhaps created—on the Crucible, a world in which anything is possible.

The Crucible is ancient, but ever renewed. An artificial planet hanging in the center of the universe, the Crucible’s many layers remain constantly under construction by the enigmatic and mischievous Architects. For raw materials, the Architects have harvested countless worlds, blending them into a new whole both familiar and alien to the creatures that dwell there.

Whether lone specimens or entire cultures, the beings brought to the Crucible find themselves in a strange wonderland with no obvious means of returning to their former homes. Some thrive, building new societies and developing new technologies with the aid of the mysterious psychic substance known as Æmber.

Some discard the trappings of their old lives, adopting the ways and customs of new tribes discovered in this new world. Others devolve, bodies and minds twisted beyond all recognition, incorporating Æmber into their very bodies.

As an Archon, you have gathered followers in your journeys throughout the Crucible, allies who find value in your ageless wisdom and your ability to speak to all creatures. With the aid of these allies, you seek out Vaults hidden throughout the Crucible by the cryptic Architects. Each Vault can only be unlocked by Æmber-forged keys. Once open, a Vault’s contents—the power and knowledge of the Architects—can be consumed by only a single Archon.

When two Archons discover a Vault, only one can gain its knowledge. Only one can move one step closer to the secret of the Crucible...

KeyForge is a two-player card game in which each player takes the role of an Archon, and leads that Archon’s deck against their opponent.

A player’s deck represents a team that is attempting to gain Æmber and forge keys. The first player to gather three keys is able to unlock a Vault and win the game.

The defining feature of KeyForge is that no two decks are alike.

KeyForge cards are not sold individually; they are always sold as complete decks. Every deck in existence is unique!

This section introduces a number of foundational concepts to keep in mind while playing the game.

During the game, players use their cards to collect Æmber (also represented by this symbol:

). Players use Æmber to forge keys. The game ends immediately when a player forges their third key, and that player wins the game. 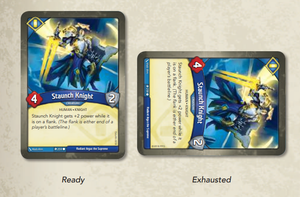 Cards that are in play exist in one of two states.

Ready cards are oriented upright so that their text may be read from left to right. A ready card can be used during a player’s turn, causing it to exhaust.

Exhausted cards are rotated 90 degrees to the side. An exhausted card is not able to be used until it is readied by a game step or card ability.

The game is played over a series of turns. Players alternate taking turns until one player wins the game.

Each turn consists of five steps:

The player taking a turn is referred to as the active player. The active player is the only player that can perform actions or make decisions; a player does not make any decisions when it is not their turn.

Each step is described in the following sections.

If the active player has enough Æmber to forge a key during this step, they must do so. To forge a key, the active player spends Æmber from the Æmber pool on their Archon identity card, returning it to the common supply. Then, that player flips any one of their key tokens over to its forged side, indicating that the key has been forged.

The default cost to forge a key is six Æmber (6

). Some card abilities may increase or decrease this number.

No more than one key can be forged during this step each turn, even if the active player has enough Æmber to forge multiple keys.

Some cards have effects that allow Æmber on these cards to be spent when forging keys. If there is enough Æmber on cards with this effect you control combined with the Æmber in your Æmber pool to forge a key you must do so during Step 1.

After choosing a house, the active player has the option to take all cards in their archives and add them to their hand. (See Archives.)

A player cannot choose to activate a house unless it is either on their Archon identity card or they control a card that belongs to that house. If a card effect instructs a player that they must activate a house other than one in the aforementioned categories, that card effect is ignored (See Cannot VS Must/May).

Play, Discard, and Use Cards of the Chosen House

A card’s house is determined by an icon in the upper-left corner.

If the active house corresponds to a card’s icon, that card is eligible to be played, used, or discarded.

Rules for playing, discarding, and using cards are described later.

First Turn Rule: During the first player’s first turn of the game, that player cannot play or discard more than one card from their hand. Card effects can modify this rule. The active player cannot play, use, or discard cards that aren’t of the active house unless specified by a card ability.

The active player readies each of their exhausted cards.

If the active player has more than six cards in hand, they do not discard down to six.

If a player needs to draw cards (during this step or at any other time) and cannot because their deck is empty, that player shuffles their discard pile to reset their deck, and then continues to draw (cards are drawn one at a time).

When a player’s turn ends, if that player has enough Æmber in their pool to afford a key, the player announces “Check!” so that their opponent knows the forging of a key at the start of that player’s next turn is imminent.

Chains represent supernatural bindings that are occasionally placed onto specific Archons by the Architects: sometimes in an effort to better challenge the Archon to grow and overcome greater adversity, and other times to penalize the Archon for breaking a rule or a piece of Crucible etiquette.

A player may gain chains through card abilities during a game. When a player gains chains, that player increases their chain tracker by the number of chains gained.

Each time (including during setup) a player with one or more chains would draw one or more cards to refill their hand, that player draws fewer cards (based on their current chain level, see below) and then sheds one chain by reducing their chain tracker by one. The more chains a player has, the greater the card penalty becomes.

When the players have a sense that a particular deck is stronger than the opposing deck, start it with four chains. From then on, every time the chained deck wins three games in a row against that opposing deck, adjust the number of chains up by one, and if it loses three games in a row, adjust the number of chains down by one.

As a player plays more games with their collection, the number of chains assigned to a deck will fluctuate up and down based on the matchup and how well the deck has performed against the opposing deck.