The adventures replace the opponent with an automated deck that each player must draw from when their opponent would normally take a turn. The cards in this deck contain actions that are performed against the players, creatures for the players to fight, and artifacts that the players must avoid or overcome. In this way, any KeyForge deck can be used when playing against either adventure. However, because each adventure has a unique victory (and loss) condition, players may find the decks that are most effective at winning in this new game mode are not the same as the ones that are that effective in standard KeyForge play.[1]

The first two Adventures, Rise of the Keyraken and Abyssal Conspiracy, expanded upon the themes and mechanics found in Dark Tidings and were initially released as a free, print-and-play product. In July 2022, Ghost Galaxy announced that they will be making these two KeyForge Adventures available as a retail product with additional "Nightmare" cards to increase the difficulty of the Adventure. [2]

On September 16, 2022 Ghost Galaxy announced Fall of the House Gormengeist, the third KeyForge Adventure, that will serve as a preamble to the themes and mechanics of Grim Reminders. 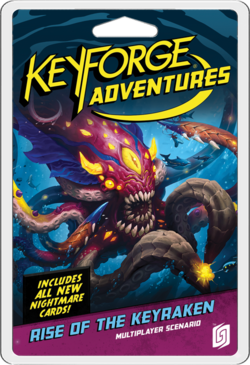 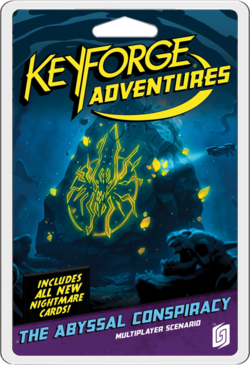 Fall of the House Gormengeist 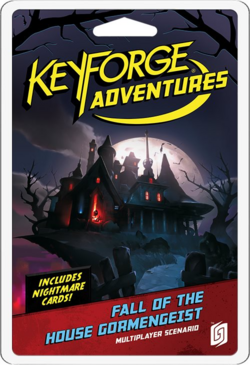 You and a few fellow Archons have recently been presented with a mysterious invitation, delivered by a strange hooded creature making odd clanking noises.

The strange courier is quickly forgotten after you see the gorgeous invitation. Filigreed and Æmber-lettered, it graciously asks that you attend an event of no small magnificence at an old estate near Diremouth, a distant, mostly forgotten part of the Crucible. It seems suspicious. Yet the invite is strangely alluring, and there is a promise of Æmber...