Both of these new adventures, Rise of the Keyraken and Abyssal Conspiracy, replace the opponent with an automated deck that each player must draw from when their opponent would normally take a turn. The cards in this deck contain actions that are performed against the players, creatures for the players to fight, and artifacts that the players must avoid or overcome. In this way, any KeyForge deck can be used when playing against either adventure. However, because each adventure has a unique victory (and loss) condition, players may find the decks that are most effective at winning in this new game mode are not the same as the ones that are that effective in standard KeyForge play.[1]

Ghost Galaxy announced that they will be making the existing KeyForge Adventures available as a retail product with additional "Nightmare" cards to increase the difficulty of the Adventure. [2] 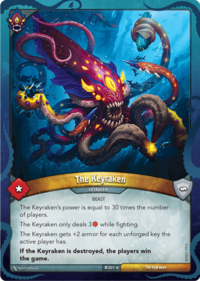