Dark Tidings is the fifth KeyForge set and will contain 280 new cards. It was announced on July 29, 2020 during the Fantasy Flight Games In-Flight Report and will be released in early 2021. House Dis rotates out for the new house called the Unfathomable. The Unfathomable contain aquatic, water-based creatures such as the Aquans. The Aquans were first hinted at with the Anomaly creature Valoocanth, but water creatures have appeared as early as Call of the Archons on cards such as Terms of Redress and Chaos Portal. Danny Schaefer, one of the developers of Dark Tidings, described the Unfathomable as featuring mermaid and Lovecraftian creatures[1]. The new house is marked by powerful, disruptive abilities that include taxing and exhausting effects. 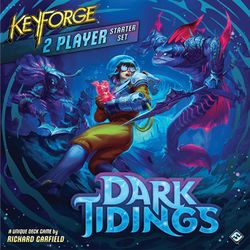 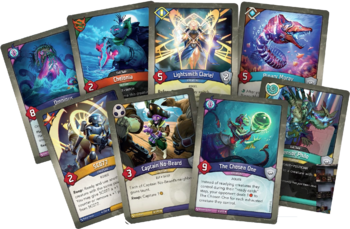 Dark Tidings features a new mechanic called the tide, in which players must raise or lower the tide in order to enable certain powerful card mechanics. Each Dark Tidings Archon deck will include a tide card for players to use, but the tide card always begins out of play. Only one player's tide card need be used. At the start of a game, the tide is neither high nor low. A player must take three chains in order to raise the tide and can only do so once per turn, as it requires using an Omni ability. Card effects that involve the tide are indicated by a small reminder symbol ( ). The Unfathomable, the new house in this set, are particularly capable at using the tide to their advantage, but all houses have some tide abilities. Some Dark Tidings cards will even allow players to raise the tide at no cost.

The set also introduces a rare new type of deck called an Evil Twin deck. Although the exact rarity of these decks is unknown, the developers have stated that the rarity is closer to 1 in 12 than 1 in 100. These decks contain Evil Twin cards, which are variations on cards that exist in the set but contain different artwork and card effects. Each Evil Twin card is marked by a new special rarity symbol ( ) and has a different card number from its original version. All Evil Twin decks are duplicates of decks that already exist in a non-Evil Twin form. While not all Dark Tidings cards have an Evil Twin version, these decks will always contain the Evil Twin version of a card whenever possible. The cards that can twin are all new to the set so the twins could be designed together. [2]