The active player can use any number of cards from the active house that they have in play during step three of their turn. Depending on a card’s type, the active player is able to do different things when using that card.

An upgrade modifies the creature it is attached to and is not used independently of that creature.

There are two types of abilities that enable a player to use an artifact: “Action:” abilities and “Omni:” abilities.

Any ready creature of the active house may reap. When a creature is used to reap, the creature exhausts and its controller gains 1 Æmber for their Æmber pool. Then, all “Reap:” abilities the creature has, if it has any, resolve.

Any ready creature of the active house may fight. 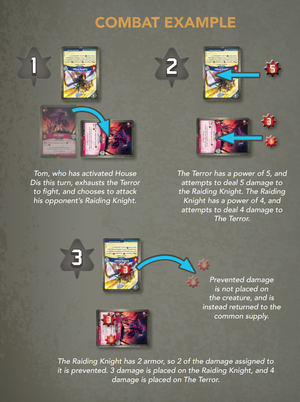 When a creature is used to fight, the creature exhausts and its controller chooses one eligible creature controlled by the opponent to be fought. Each of the two creatures deals an amount of damage equal to its power (the value to the left of the card’s title) to the other creature. All of this damage is dealt simultaneously. After the fight resolves, if the creature that is being used to fight survives, all “Fight:” abilities the creature has, if it has any, resolve.

A creature cannot fight if there are no enemy creatures to be fought.

When a creature leaves play, any Æmber on that creature is gained by the opponent.(see Capture)